If you haven’t heard yet, 35 year old James Holzhauer has been killing it on Jeopardy of late. Per fivethirtyeight.com:

Holzhauer has played this game like no one has ever played it before — large bets coupled with expert navigation of the game board. He has now [won 19] games with his total winnings sitting above $1,000,000 and counting, and he is well on his way to surpassing the $2,520,700 won by the most famous “Jeopardy!” record-holder of all, Ken Jennings. One difference? It took Jennings 74 straight victorious shows to bring in that haul, and if he maintains his current pace, Holzhauer is on track to break that record in as few as 34.

Why do we care? Beyond James being from nearby Naperville, IL and a graduate of University of Illinois, which we do some work with through the RCM University Program, it piqued our interest because how he’s doing it is rather quant-like. He goes for high values first, and then attacks the board looking for daily doubles with which to double the gains already gotten. He’s applying his own quantitative model of sorts, albeit run on the wetware of his brain instead of modern computer hardware, on how to go about placing bets and choosing squares on the board.

Where have we seen a quantitative approach to something which had until then been considered mostly an art form…. Oh yeah, trade execution. In the old days, you had a floor broker who did a good job of getting big orders done….in what most considered to be more of an art than a science (although discussions with floor broker reveals similar wetware algorithms at work back then in a back-of-the-envelope fashion). But then along came electronic trading and views of order books and APIs and all the rest. One look at fivethirtyeight.com’s graphic showing where the daily doubles have historically been sure reminded us a lot of something we work with day in and day out. 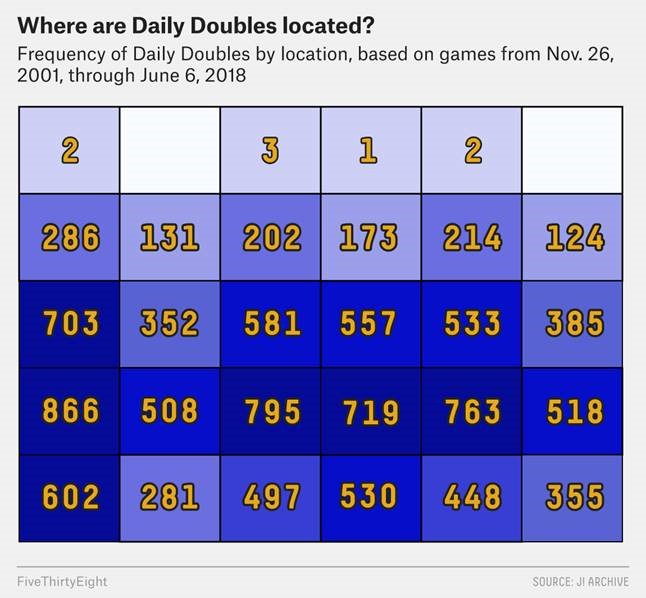 We’re talking about volume profiles, of course. While a quick glance at that table could be forgiven for seeming like a new type of view for the DOM (or depth of market), with each value representing the number of contracts to be bought or sold at different levels, it can also be viewed as volume buckets across time. Think low value clues ≈ illiquid periods, high value clues ≈ day session hours for a product, and the heavy concentration in the 4th row similar to settlement or closing periods. Just like Mr. Holzhauer likely uses this historical information to inform his algorithm on where to hunt for daily doubles once funded sufficiently, many execution algorithms will analyze a futures contract history manage order placement based on historical models of when volume is likely to occur and help blend order flow into the overall market.

Of course, just like in Jeopardy where you still have to be knowledgeable on the category and get the specific clue correct, knowing when and where to place child orders is only half the battle – you still have to have choose the product, decide the direction, etc. But just like future Jeopardy stars are no doubt analyzing the successful strategies employed by Holzhauer, enlisting a quantitative execution algorithm has become a new best practice.

Disclaimer
The performance data displayed herein is compiled from various sources, including BarclayHedge, and reports directly from the advisors. These performance figures should not be relied on independent of the individual advisor’s disclosure document, which has important information regarding the method of calculation used, whether or not the performance includes proprietary results, and other important footnotes on the advisor’s track record.

Benchmark index performance is for the constituents of that index only, and does not represent the entire universe of possible investments within that asset class. And further, that there can be limitations and biases to indices such as survivorship, self reporting, and instant history.

Managed futures accounts can subject to substantial charges for management and advisory fees. The numbers within this website include all such fees, but it may be necessary for those accounts that are subject to these charges to make substantial trading profits in the future to avoid depletion or exhaustion of their assets.

Investors interested in investing with a managed futures program (excepting those programs which are offered exclusively to qualified eligible persons as that term is defined by CFTC regulation 4.7) will be required to receive and sign off on a disclosure document in compliance with certain CFT rules The disclosure documents contains a complete description of the principal risk factors and each fee to be charged to your account by the CTA, as well as the composite performance of accounts under the CTA’s management over at least the most recent five years. Investor interested in investing in any of the programs on this website are urged to carefully read these disclosure documents, including, but not limited to the performance information, before investing in any such programs.

Those investors who are qualified eligible persons as that term is defined by CFTC regulation 4.7 and interested in investing in a program exempt from having to provide a disclosure document and considered by the regulations to be sophisticated enough to understand the risks and be able to interpret the accuracy and completeness of any performance information on their own.

RCM receives a portion of the commodity brokerage commissions you pay in connection with your futures trading and/or a portion of the interest income (if any) earned on an account’s assets. The listed manager may also pay RCM a portion of the fees they receive from accounts introduced to them by RCM.

See the full terms of use and risk disclaimer here.